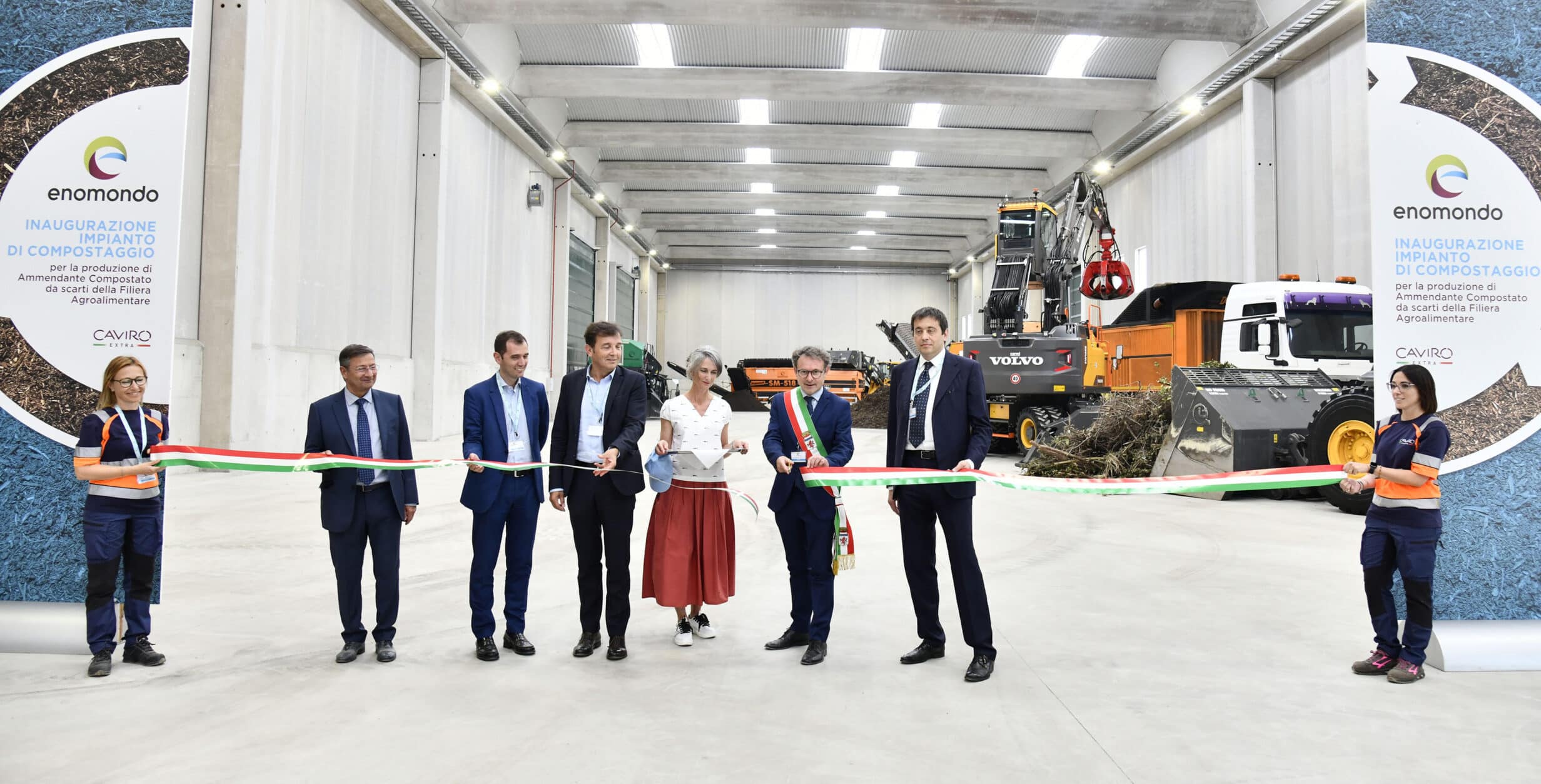 Owned by Enomondo and run by Caviro Extra, it has a productive capacity of 50,000 tons per year, obtained from the recovery of cutting and pruning of public green areas and waste from the agro-food chain.

The production plant for a new type of natural fertilizer – the Composted Fertilizer from Agro-food Chain waste, or ACFA (Ammendante Compostato da scarti della Filiera Agroalimentare) – was inaugurated in Faenza, within the Caviro Extra facility. Compared to chemical fertilizers, this new natural product presents lower costs, and provides nourishment to the soil.

This plant, result of an investment of approximately 8.5 million euro, has a productive capacity of about 50,000 tons per year and is property of Enomondo – a company jointly owned by Caviro Extra and Herambiente. Caviro Extra, one of the subsidiary companies of Caviro Group, will also manage the plant. The ACFA adds up to the other two types of soil fertilizer already produced by the Group (mixed and green composted). By 2022 the Faenza-based plant is estimated to release more than 130,000 tons of agricultural fertilizers, 75,000 tons of which consisting of the three fertilizer types.

“This new plant offers an additional service to farmers and members of the Caviro Group – explains Sergio Celotti, CEO of Enomondo –. In a global context where fertilizer prices are largely increasing and there is a scarce availability of the same, we provide a natural product, at a lower cost and obtained from waste. It is a process that perfects Caviro Group’s circular economy, because it adds value to the soil and the vineyard”.

Inside the plant, several lanes of cutting, pruning and digestate material are stacked, coming from Caviro Extra anaerobic digestion plants (dedicated to the production of biogas). These lanes are regularly mixed and turned by a large machinery responsible for “flipping” the heaps, which helps to maximize aeration and natural fermentation (hence the “aerobic plant” denomination). At the end, during the curing phase, the product is left to mature, then screened and prepared for shipment.

“The whole process takes place indoors, in a 10,000 square meter facility, with constant aspiration – says Giovanni Ferrucci, commercial manager of Enomondo –. The air is then conducted through large biofilters to reduce odor emissions, a commitment that Caviro made with the city of Faenza”.

The tests for the production of ACFA started in 2017, as part of a project conducted by the University of Bologna on the farmlands of the Fondazione Navarra in Ferrara. The encouraging results convinced the Ministry of Agriculture to start the approval procedure for this new type of fertilizer: on May 31st, ACFA was officially recognized with the publication in the Official Gazette.

Forecasts and benefits for the soil

“Forecasts – continues Ferrucci – are good: the plant is equipped for improving productivity to 80,000 tons per year, in order to satisfy the increasing demands of the market. At present the fertilizer can be purchased in bulk, but we’re already evaluating a new pellet production to facilitate transport and use on different crops”.

Field tests have shown that, in the long term, the ACFA can allow a reduction of chemical fertilizer use up to 50%. “After 4 years of experimentation, we’ve achieved an excellent and well-stabilized product, to the point that it can reach perfect quality standards within 30 days of fermentation, rather than the usual 90 days – concludes the CEO –. It’s a product that comes from the vineyard and returns to it, regenerating the soil while also allowing new plants to grow healthier with better organoleptic characteristics”.

The plant inauguration, held on June 20, was also attended by Alessio Mammi, Regional Councilor for Agriculture and Agro-food sector, who stated: “In order to perfect the ecological transition of our country we need many investments, both private and public. Regarding the public investments, we are going to use the resources of the Rural Development Plan: 913 million Euro within the 2023-2027 period. We also need to support and facilitate private investments, such as this Enomondo plant, which are essential for creating a circular economy that doesn’t produce further waste but recycles them. In this way we can have resources, energy and new products, like this natural soil fertilizer, while supporting the farmers, who can obtain higher profit margins. And finally, this kind of plant is the demonstration that environment and agriculture are not in opposition – quite the contrary: agriculture can make an important contribution to sustainability and environmental protection”.